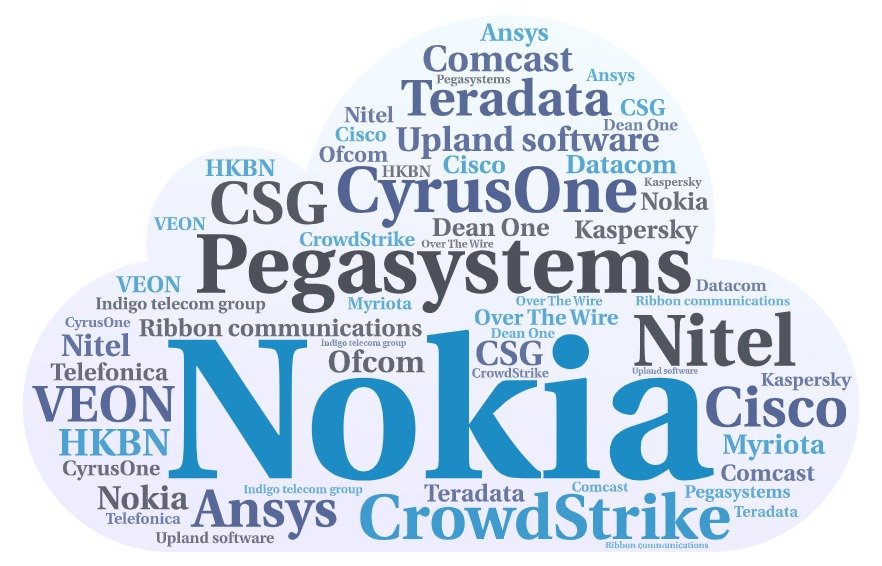 Here’s our carefully curated list of exec moves announcements for the period February 17th to February 23rd 2020, relevant to the ICT sector.

Telecom equipment supplier Nokia has eliminated the role of group chief information officer, last held by Ursula Soritsch-Renier, as part of a broader reorganization at the 22 billion euro ($24 billion) company.

Her responsibilities have been assumed by Bhaskar Gorti, the president of the Finnish company’s Nokia Software unit and the group’s chief digital officer.

The change occurred at the start of the year, but this is the first time the company has publicly commented on it. It comes at a pivotal time for Nokia, which has been investing heavily in 5G wireless technology and could gain from U.S. distrust of Chinese rival Huawei.

Prado has more than 20 years of experience in leadership positions in the technology industry, including as vice president of sales at Oracle, president of Salesforce Brazil, and general manager of Microsoft.

CyrusOne announced that the Company’s Board of Directors has appointed Tesh Durvasula as President & Chief Executive Officer.

This appointment follows Gary Wojtaszek stepping down as President & Chief Executive Officer, and as a director of the Company.

Mr. Durvasula will serve as the Company’s President & CEO on an interim basis while the Board undertakes a search to identify the Company’s next CEO, which will include consideration of Mr. Durvasula as well as external candidates.

Sentonas, who most recently served as the vice president of technology strategy at CrowdStrike, is replacing Dmitri Alperovitch, who has transitioned out of the company.

Rudden most recently served as CMO of Spredfast. Miracle joins Upland from ScaleFactor, where she led the customer success team as CCO.

Nitel announced the appointment of Mark Dickey as its executive vice president of sales and marketing.

In his new role, he will be responsible for leading Nitel’s channel-first growth strategy, account management and marketing.

Over the past 20 years, Mark has built channel organizations in the telecommunications, networking and IT industries, most notably at Hewlett-Packard and Oracle.

Ribbon Communications announced that Bruce McClelland has been appointed as its President, Chief Executive Officer and a director, effective on or around March 1, 2020.

Mr. McClelland has served in numerous leadership roles throughout his three-decades long career, which includes twenty years at ARRIS International, where he most recently served as its Chief Executive Officer and led the sale of ARRIS to CommScope for $7.4 billion in April 2019.

Ansys announced that Robert Calderoni and Ravi Vijayaraghavan have accepted appointments to the Ansys, Inc. Board of Directors effective March 1, 2020.

Robert Calderoni currently serves as the chairman of Citrix Systems, Inc., a multinational software company that provides applications, software as a service and cloud computing technologies. Prior to his current role, he was the executive chairman of Citrix and served as its interim chief executive officer and president.

Ravi Vijayaraghavan is a senior partner at Bain & Company, Inc., a management consulting firm, and director and head of its Asia-Pacific technology practice, as well as a member of its global partner promotion and compensation committee.

CSG announced the appointment of Sudhansu Panigrahi as vice president and center head of the company’s India location to lead an expanding group of experts in Bangalore.

With nearly 30 years of experience in the information technology and services space, Sudhansu comes to CSG from UST Global, a leading digital technology services company where he spent six years as the Center Head for the Bangalore and Hyderabad delivery locations.

Comcast Corporation announced it has promoted Jennifer Khoury to Chief Communications Officer, succeeding D’Arcy Rudnay who, after a 16-year career at Comcast, is retiring.

Kaspersky has appointed Christian Milde as General Manager for the DACH region. He succeeds Milos Hrncar, who left the company last summer after just under a year and a half to Palo Alto Networks.

Milde comes from Avira, where he has been responsible for developing the SME strategy as Vice President of Partner Sales Worldwide for the past two and a half years.

He now heads the local team at Kaspersky and is responsible for all sales and marketing activities in Germany, Austria and Switzerland.

Indigo also announced that following its acquisition of 4site in December 2019, Ian Duggan joins the board of Indigo.

Latterly Kevin Taylor was President, Asia Pacific, Middle East, Africa and Turkey in BT and a Member of the Global Services Leadership team reporting to the CEO.

He steps into the role previously held by Scot Gardner, who now leads strategy and sales execution on the Global Specialists team for Cisco’s key technology areas across compute, cloud, IoT and service providers.

Biryukov will combine the chief executive role with his existing remit as EVP of legal affairs and corporate relations.

His appointment follows the announcement last week that Vasyl Latsanych, Beeline’s current CEO, is to step down at the end of June.

Telecommunications provider Over The Wire (OTW) has appointed Scott Smith as its new chief executive, with Michael Omeros retaining the Group CEO role in a supporting capacity.

Smith was promoted from general manager of Comlinx, a managed service provider OTW acquired in 2018. Scott founded Comlinx in 2006 after working at Avaya in a number of leadership roles.

Pieter Verbrugghe is the new Sales and Marketing Director of Dean One, the telecom and internet provider for the business market, from Monday 10 February 2020.

Pieter Verbrugghe has more than 25 years of experience in the telecom industry. After starting his career at Proximus in Belgium, he has held various senior sales management positions in the Netherlands since 1999 for T-Mobile, Liberty Global and Tele2, among others.

Myriota, global leader in nanosatellite Internet of Things (IoT) connectivity, has appointed Barbara Swanson as its first CRO to grow its global customer base.

Most recently, Swanson held the role of Vice President, Sales & Managing Director, Asia-Pacific for Germany-based TeamViewer, which is a leader in IoT and produces remote control, monitoring and collaboration software.

Datacom Group has announced Tony Carter’s appointment as the new chair of the board following the retirement of current chair, Craig Boyce.

Carter is chair of Fisher & Paykel Healthcare and TR Group and until recently was also chair of Air New Zealand. He is also on the board of Vector and ANZ Bank New Zealand and was awarded the Companion of the New Zealand Order of Merit – for services to business governance – in this year’s New Year Honours list.

Ofcom has announced that Professor Simon Saunders will join Ofcom next month as Director of Emerging Technology.

Simon joins from Google, where he was Head of Connectivity Partnerships for Europe, Middle East and Africa. He has been with the technology company since 2015, working with mobile operators globally on improving wireless connectivity through advanced technology.