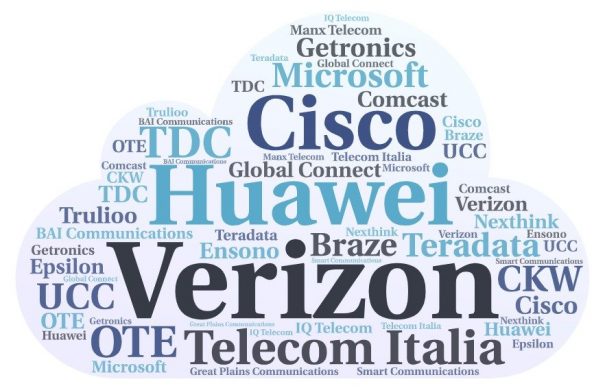 Here’s our carefully curated list of exec moves announcements for the period February 3rd to February 9th 2020, relevant to the ICT sector.

Huawei Australia and New Zealand vice president of channel and commercial Geoff Wright is set to leave the company amid a major restructure.

Wright came to the role just months after vacating his role as director of channels across Australia and New Zealand (A/NZ) at Dell EMC, a role he held for over three years.

TIM announces that Federico Rigoni was appointed Chief Revenue Officer, reporting directly to the Chief Executive Officer, in lieu of Lorenzo Forina (who holds 50,000 TIM ordinary shares) whom the Company thanks for the significant professional and managing contribution given to the Group.

Cisco has appointed Reem Asaad as its new vice president of its Middle East and Africa region.

Before joining Cisco, Asaad served as CEO of Raya Contact Center, a business process outsourcing service provider based in Cairo.

The person in charge of Microsoft’s Surface line of PCs is reportedly taking charge of the Windows technology people see when they use those Surfaces.

Panos Panay, the company’s chief product officer, who has been the face of the Surface for the past several years, is getting responsibility for Windows client — the design and functionality that users see — reporting to executive VP Rajesh Jha, as part of a broader reorg in that group. The core underlying technology is staying under executive VP Jason Zander.

Clausen comes with extensive experience from the telecommunications industry. From 2005 to 2010, he was CEO of Telenor’s Danish business. From 2010 to 2014, he was the chief executive of  DiGi and from 2014 to 2016 he was director of strategy and digital for Telenor on a global scale and adviser to the group’s CEO.

Tampourlos, who was financial director of the OTE group from 2003-2004, has since been an independent member of the OTE board. At the same meeting, the shareholders re-elected Michail Tsamaz, CEO of OTE, to the board of Telekom Romania’s fixed communications unit, Telekom Romania Communications, for a new term of four years.

On November 21, 2019, a plan to merge IP-Only and GlobalConnect was announced. Now GlobalConnect/IP-Only presents the new operational model and leadership team and begins operating as one joint company.

The Group Leadership Team will consist of the following members:

Getronics has recently received further financial backing from its lenders to invest in transformation initiatives to drive long-term growth.

In connection with this announcement, Rogier Bronsgeest (COO of Getronics) and Hugo Eales will be co-leading the international business under the Getronics brand.
Rogier will continue to serve in his role as Chief Operating Officer. Hugo, former CFO of COLT Technology Services, has been appointed Chief Financial Officer.

Mr Leprince has more than two decades of experience designing, building and operating wireless communications infrastructure around the world, including more than ten years at Nokia, where he was President, Global Services. His current roles include Chair of West Midlands 5G, Chair of AWTG, senior advisor for Bain & Company as well as board advisor and investor in multiple technology companies.

Smart Communications announced it has appointed Nick Smith to lead sales efforts in Asia Pacific. Smith joins Smart Communications from Informatica, where he served as managing director of ANZ, leading tremendous growth across tier one enterprise clients in both the commercial and government sectors.

Prior to joining Informatica, Smith served as Managing Director for both Pitney Bowes Software and Thunderhead, building credibility in the region for his leadership in customer communications management software.

Ssewankambo was previously the head of research and development unit as well as coordinator of the office of the executive director.

Nexthink announced the appointment of a new Chief Technology Officer, two additional board members and a new Chairman to help fuel the company’s next stage of growth and innovation.

Jimmy Anidjar becomes Chairman of the Board for Nexthink.

John Egazarian has been named chief operating officer for IQ Telecom, a telecommunications management firm based in Wethersfield, and will be responsible for all aspects of daily operation, business development, and customer service.

Before joining IQT, John served as COO and head of product at CÜR Media.

Michel takes over from Co-Founder and former CEO Jerzy Szlosarek, who stepped down after a successful 16 years with Epsilon.

Swiss operator CKW Fiber Services has announced that the CEO of Axpo, Christoph Brand, has been appointed as a new member of its management board, effective on 01 June.

Brandt succeeds Andrew Walo, who decided to resign. The vice president of the management board Hansueli Sallenbach took over the chairmanship on an interim basis on 30 September.

Stanton is a board advisor to the Nationwide Building Society in London and serves as an advisor to FinTech startups. She has more than 20 years of payments and digital security experience.

Braze, the comprehensive customer engagement platform, announced the appointments of Isabelle Winkles as Chief Financial Officer (CFO) and Tara Walpert Levy to its board of directors.

Isle of Man-based operator Manx Telecom has announced the appointment of Peter Callow as Head of Wholesale.

Peter takes over the role from Graham Shimmin, who retired exactly 40 years to the day after starting work as an apprentice with the company on December 3, 1979.