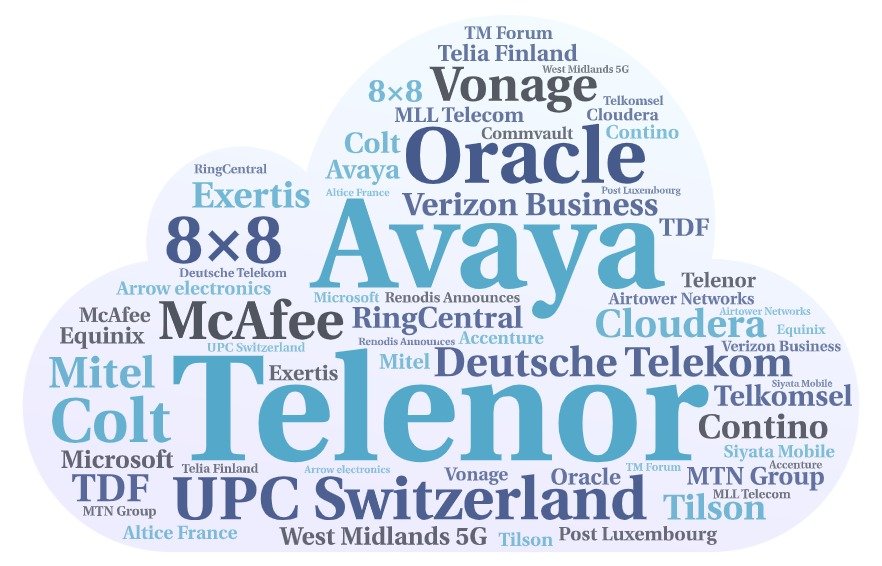 Movers and Shakers, Week 3 of 2020 – our curated list of news and announcements of executive changes in the ICT sector.

Sharad Mehrotra, CEO of Telenor Myanmar, has been appointed the new CEO of dtac, Telenor Group’s mobile operator in Thailand. He replaces Alexandra Reich, who is seeking new leadership opportunities. Hans Martin Hoegh Henrichsen, currently Chief Corporate Affairs Officer in Telenor Myanmar, will become acting CEO after Mehrotra. Grameenphone’s deputy CEO and CMO, Yasir Azman has been appointed the new CEO of the Bangladeshi operation, with current CEO Michael Foley relocating to Africa, where his family is based.

Avaya Holdings announced it has appointed William Madison as Vice President of Cloud Sales for North America. Madison will be responsible for enabling accelerated growth and adoption of Avaya cloud solutions with customers and partners, including the new Avaya Cloud Office UCaaS offer resulting from the company’s recent strategic partnership with RingCentral.

Baptiest Coopmans to become CEO of UPC Switzerland, Severina Pascu to serve as Deputy CEO and CFO for Virgin Media.

“After almost one and a half years at the helm of UPC and following the successful implementation of its Growth Plan, Severina Pascu (46) will hand over the role of CEO of UPC Switzerland to Baptiest Coopmans (54), effective as of 1 February 2020. In her new role, Pascu will support Virgin Media, the largest subsidiary of Liberty Global, as Deputy CEO and CFO.”

His successor will be Ulrich Klenke (48), former CEO of the advertising agency Ogilvy and most recently a consultant for Volkswagen.

Kelman was named one of Forbes’ most influential CMOs of 2014.

Vonage Holdings Corp. announced the retirement of David Pearson, who has served as the company’s Chief Financial Officer (CFO) since 2013. He will serve as CFO through May, and then as a special advisor to ensure a smooth transition to his successor.

A global executive search firm will conduct the search for Pearson’s replacement. He will actively participate in the selection process.

Young will remain at McAfee in an advisory role to assist with the transition and will become a Senior Advisor at TPG Capital. Leav will also be appointed to McAfee’s Board of Managers.

Former CenturyLink CTO Aamir Hussain has landed at Verizon Business as its Senior Vice President and Chief Product Officer, and re-gained a seat on MEF’s board of directors.

Hussain was hired as CenturyLink’s CTO in 2014. He played a key role in transforming CenturyLink from a legacy telco into an IT-based services company by leveraging software and network functions virtualization (NFV) and cloud-based IP services.

Cloudera announced the appointment of Robert Bearden as President and Chief Executive Officer.

Robert Bearden was co-founder and CEO of Hortonworks, a publicly traded open-source company that merged with Cloudera in 2019. He also served as President and COO of SpringSource, a leading provider of open-source developer tools, until its acquisition by VMWare in 2009.

Annette joins Colt from ADVA, where she most recently served as its Senior Vice President Sales Emerging Markets.

She replaces Luc Welter, who was appointed Customer Experience director on 01 January while retaining his previous role until Faber’s arrival.

Eswaran will be responsible for leadership and execution across products, engineering, sales, marketing, services, customer care, operations, and human resources.

MTN Group has announced that Gordian Kyomukama has been appointed as the new MTN South Sudan CEO, effective 21 January 2020. Gordian is a seasoned telecoms executive, with close to 30 years of experience in the sector, most of which has been with MTN.

MTN Cameroon CEO, Hendrik Kasteel, will be leaving MTN at the end of March, due to personal reasons. He will serve out his notice over the next two months, and a successor will be announced when finalised.

Contino announced that Seb Bulpin has been appointed to the position of Global CEO.

Seb is one of Contino’s longest-serving employees, having most recently served as Global SVP of Sales and Managing Director of the EMEA business.

Exertis announced the appointment of Liz Greenwood as UK IT director, reporting to Richard Hinds, Exertis UK&I, Chief Operating Officer. She will have responsibility to continue to drive the overall service and performance improvements associated with the UK IT function.

Greenwood joins from Royal Mail Group, having spent almost eight years with the company most recently as business IT director for Parcelforce Worldwide.

Bringing a wealth of industry knowledge to the WM5G team, Michel boasts over 30 years’ experience working for large tech companies such as Atos and Nokia, both in the UK and abroad.

Telia Finland has named Lassi Nummi as new CEO of Assembly. He will succeed Pekka Aako on 01 February and will also participate in developing the Telia Esports Series league.

Lassi Nummi joins the company from a position as Head of Marketing and e-sports at Rovio Entertainment subsidiary Hatch.

Tilson, a national network deployment and IT professional services firm, has appointed Sheryl Tullis as the newest member to its Board of Directors.

Ms. Tullis is a Partner at Direct Technology, a veteran-owned software and services company, and Head of Strategic Communications for TA Group Holdings, a private equity firm.

Arrow electronics has announced that W. Victor Gao has been named to its executive leadership team as Senior Vice President and Chief Marketing Officer.

Ralph Haupter, Microsoft’s former CEO in Germany and recently head of its operations in Asia, will become president of the company in the Europe, Middle East and Asia (EMEA) region, effective 01 April. Microsoft has confirmed the news.

Airtower Networks announced that Oliver Valente is joining their leadership team as Chief Executive Officer. This move is aligned with leadership’s vision to further invest in their expanding in-building wireless portfolio.

Mr. Valente is a veteran of the wireless industry with over 25 years of executive leadership experience at companies including Centel Cellular, Sprint where he served as CTO and SVP of Product Development, and most recently at ExteNet Systems where he served as EVP & COO.

MLL Telecom announced that it has appointed Shaun Ledgerwood as its new CEO. Shaun will pick up the mantle from outgoing CEO, Gary Marven, who is retiring after ten years’ service but will remain a director of the business.

During his career Shaun has worked for Cable & Wireless, KPNQwest, Sprint, NextiraOne and most recently Niu Solutions as CEO.

Mr. Kitson has previously held positions at Bell Mobility as Push-to-Talk (PTT) and IOT Solutions Team Lead, TELUS Client Solutions, Rogers Communications as a Sales Manager and an IOT Solutions Sales Executive, and has been an Enterprise Account Executive at Shaw Communications.

Accenture has named Marco Huwiler country Managing Director for Switzerland. Huwiler succeeds Thomas D. (Thomi) Meyer, who has served in the role since 2003 and will retire from the company in May 2020 due to reaching the contractual age.

French infrastructure operator TDF has announced that since November, its telecom division has been led by Roland Chedlivili and Jean-Louis Mounier, who have been appointed Co-Directors with joint responsibilities.

Chedlivili has been working with TDF since 2010 as Director in charge of group strategy. With this promotion, he becomes part of the group’s executive board. Mounier joined the TDF board in 2010, when he became group CTO.

The Managing Director appointment will see Danskine relocating from San Francisco back to Sydney where he will report to Deutsch in his new role of Equinix Asia-Pacific president.

Commvault announced the strengthening of its global presence and expertise with the addition of two industry veterans to its executive leadership team.